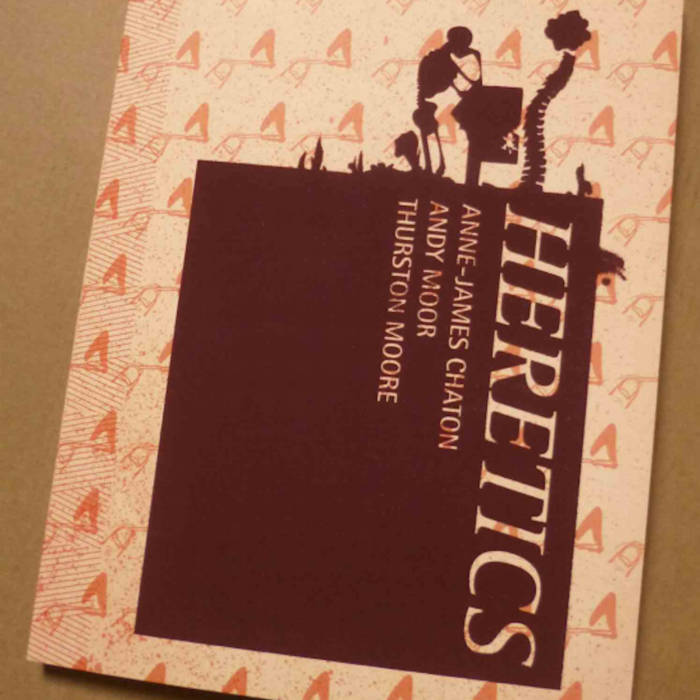 ‘Heretics’ is a series of portraits of radical heretical figures
found throughout the history of schismatic thinking.
Heretics like Caravaggio, William Burroughs, Jose Mujica,
Marquis de Sade and Johnny Rotten, fascinated the artists.
These influential figures are presented here in the form of
poetic texts and catchy melodies combined with experimental
noise.

With the addition of ex-Sonic Youth guitarist, singer and
songwriter Thurston Moore – Anne-James Chaton and Andy
Moor’s more than a decade long collaboration becomes an
exciting trio. They researched and created the material for
Heretics during a residency in the French port of St Nazaire, in
July 2014. They used voice, guitars and electronics in solo, duo
or trio, to collaboratively explore their ideas and co-write texts
and music.

Moore and Moor both emerged from the punk/post-punk scene
– albeit on different continents. This familiarity with each
other’s background and music meant they were able to work
at an intuitive fast pace during the making of these pieces,
and subsequent recordings. Chaton’s powerful delivery and
hypnotic style holds it’s own amidst the two guitarists building
a rich wall of sound, melody and noise around him. Chaton and
Moore’s contrasting voices and choice of words ring out in the
tradition of non-conformist poetry. Shaped by jagged distorted
guitars and penetrating chords, the trio’s combination of guitar
and poetry evokes a new genre.

‘Heretics’ was recorded at La Muse en Circuit (Paris), and first
performed live at the Theatre de Saint Nazaire, in 2015. The
making of Heretics is documented in a film made by Benoît
Bourreau.

This release, containing a CD, book of texts, and DVD – is designed by Isabelle Vigier. There is also a signed edition of ‘Heretics’, including original prints by the three authors. This release was made possible with support from lebeau et associes (Paris) Herezie (Paris) Mona Films (Paris) la Muse en Circuit (Paris).