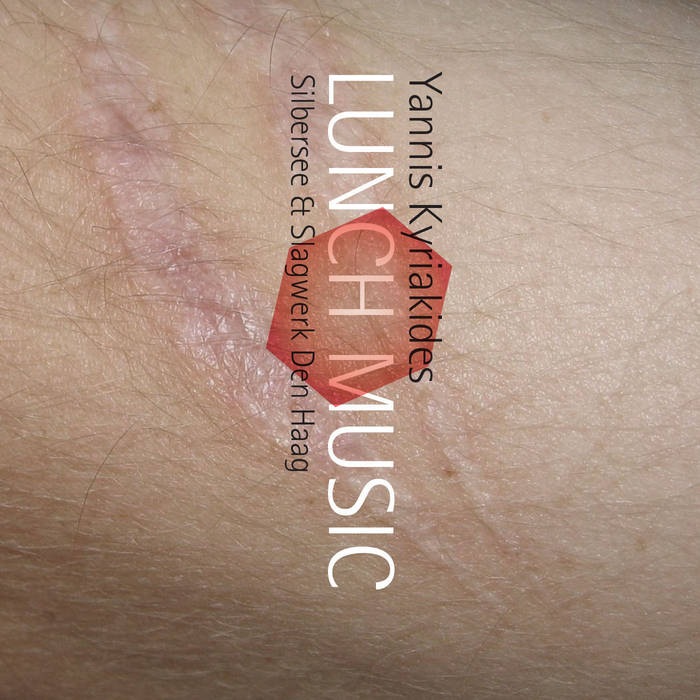 Lunch Music by composer Yannis Kyriakides is a set of pieces for voices, percussion and live electronics, inspired by the 1959 book Naked Lunch by William S. Burroughs. On this recording the virtuosity of percussionists Slagwerk Den Haag (recently heard on the recording of Michael Gordon’s Timber) and contemporary vocal specialists of Silbersee are embedded in a rich sonic environment of electronics, modulated voices, grinding pulses and hallucinatory noises.

The concept of the music revolves around the idea of the polyphony of voices found in Naked Lunch. The effect of one voice speaking through another, of mediumship and possession, is a central musical concept in the piece, and it is manifested in the way the live electronics, controlled by the percussionists modu- lates the voices of the singers and the various fragments of samples heard: from the voice of Burroughs to snippets of 50’s pop songs.

The piece, originally commissioned by Slagwerk Den Haag, was composed for the dance/music theatre piece of the same name, produced by Club Guy and Roni, Slagwerk Den Haag and Silbersee, that toured The Netherlands in the season 2013/2014 and is touring again in Spring 2016.

Slagwerk Den Haag performs and develops contemporary percussion music in its most diverse forms: from existing repertoire, via a large number of new commissions and collaborations with composers, to researching the furthest limits of organized sound. The artists are highly versatile creators and performers that aim to amaze time after time, in every setting imaginable, exploring the traditional instruments as well as all forms of experimental ones; porcelain, equine jaws, glass or 3D-printed instruments.

Sibersee is an international workspace for singers and composers, which develops and produces new vocal music in combination with stage, dance, film, visual arts and other art forms. Since its foundation in 2002, it has built up a network of soloists, which can be drawn on by orchestras, theatre groups, festivals and opera houses. Recent highlights were presentations of the Machinations by Georges Aperghis during the Operadagen Rotterdam and the Boulevard Festival Den Bosch, as well as Dusapin’s opera Passion in the Holland Festival and Autland by Sergej Newski in the Bochum Ruhrtriennale.